I started this watercolour by drawing then painting (initial washes) the bird in flight. I then used masking fluid on the bird to protect it so I could work freely on the background. Next the 3 cool primaries were poured on the randomly damp surface. Dropping extra paint, wet-into-wet, the paint was blown across the surface with short sharp blasts of air directed with a drinking straw. Some areas were sprayed with water and on occasion a very soft, damp, Chinese goat hair brush was gently touched to the surface in places to guide and blend some of the paint. After drying the masking fluid was removed. The bird was re-worked and the branch described in a loose manner. The final step was adding my signature chop which I chose rather than conventional western style signature as I felt it fitted with the style of work… the Zen influence 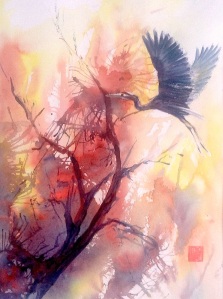